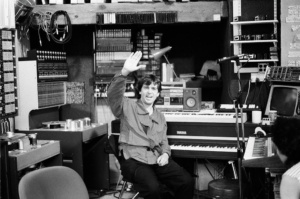 Be sure to tune in to The Night Beat on Wednesday, November 16, at 8 pm as your host Doug Crane samples from the many jazz covers of songs by British rock star Peter Gabriel. You can expect to hear from Herbie Hancock, Dianne Reeves, The Bad Plus, Kurt Elling, Geoffrey Keezer, and more.

The original lead vocalist for the band Genesis, Peter left the band in 1975 to begin his career as a solo artist. He’s still actively recording and touring with a new album to be issued in early 2023, a European concert tour beginning in May, and in the second half of 2023 a tentative concert tour of select US cities.

While certainly not a jazz performer himself, his bands have included artists from jazz and world music circles including Manu Katche, Rachel Z, David Sancious, Tony Levin, Youssou N’Dour, and Richard Tee.

Peter’s interest in world music began in earnest after the death of South African anti-apartheid activist Stephen Biko in September 1977.  Released on his third solo album, Peter penned the song “Biko” as a response to Biko’s severe beatings by South African police and as a personal statement against the government of South Africa. The song is credited with creating a political awakening about the atrocities and brutalities of apartheid. Not surprisingly the South African government banned both the song and the album containing it calling the song “harmful to the security of the state”.

At the time Peter was writing the song “Don’t Give Up”, he envisioned Dolly Parton as providing the voice of positive support to Peter’s portrayal of a rather despondent man. Dolly turned the offer down which would later be recorded by Kate Bush.