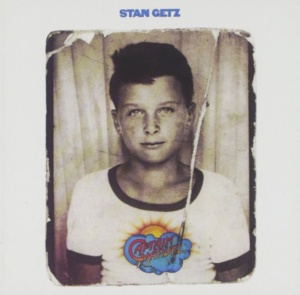 On the next Wednesday evening Night Beat with your host Doug Crane we venture back fifty years to March of 1972 for tenor saxophonist Stan Getz’s album “Captain Marvel.”

“Captain Marvel” was a reunion of sorts for Stan Getz and pianist Chick Corea, the latter having been a member of the Getz band in the late 1960s that recorded the highly regarded album “Sweet Rain” in 1967. (My only qualm against the album is that at slightly over 37 minutes, it’s far too short)

Having previously worked and toured with Stan Getz and hearing in 1971 that Stan wanted to form a new band, Chick contacted a number of musicians that he felt would be a good fit to work behind Stan. Two of them were part of Chick’s recently formed group Return to Forever: 20-year-old bassist Stanley Clarke and percussionist Airto. Tony Williams, who by 1972 had been a professional drummer for almost a decade yet was still only 26 years old, was either selected to play in the band initially by Chick or was added later by Stan Getz depending on which set of the reissued album’s liner notes you read.

In the liner notes for the reissue, Chick Corea wrote that Stan was quite receptive to playing and recording Chick’s original music. Of the seven original compositions on the album, only one was not written by Chick.

One of the fascinating things about “Captain Marvel” is the opportunity to hear some Return to Forever classics in a somewhat different setting. Stan Getz is masterful as the solo voice and drummer Tony Williams dials back his technical prowess just enough to provide a perfect musical balance.

While recorded in 1972, Columbia Records did not issue “Captain Marvel” until 1974. By that time Corea’s Return to Forever had embraced electric rather acoustic sounds. I became well aware of this in October 1973 when I attended a concert by Return to Forever at the University of Toledo. The band was touring in support of its new album Hymn of the Seventh Galaxy with a newly hired Al DiMeola replacing original guitarist Bill Connors.

Stan would continue touring and recording for the next 20 years with JoAnne Brackeen, Jim McNeely, Andy Laverne, Lou Levy, Albert Dailey, and Kenny Barron anchoring the piano chair. Any and all of the live dates that Stan recorded with pianist Kenny Barron at the Montmartre in Copenhagen during the last few years of his life are well worth seeking out, especially the final duet recordings from 1991.

But that should not be taken as a slight against “Captain Marvel.” Despite its early 1970s origin, it sounds perfectly at home and as fresh as ever in 2022, a testament to the five musicians who entered A&R Recordings Studios in New York City, NY on March 3, 1972.

Tune in every Wednesday evening at 8 pm for The Night Beat with your host Doug Crane. Only on KUVO Jazz!