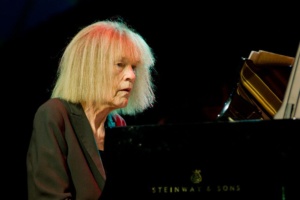 The pianist, composer, and bandleader Carla Bley turns 84 (or 86 depending on the source) on May 11. She’s been active on the jazz scene since the time she arrived in New York City in the late 1950s. Her first gig was at the legendary Birdland Club, not as a musician but as a cigarette girl who had a penchant for not selling cigarettes, at least when the musicians were performing on stage.

Not too long after Carla arrived in NYC she began writing music which pianist (and her first husband) Paul Bley performed and recorded.  Other musicians soon began to record her compositions including George Russell, Art Farmer, Jimmy Giuffre, and Tony Williams.

She composed her first large work “A Genuine Tong Funeral” after viewing a cheaply made Chinese movie that included a scene of a funeral.  Vibist Gary Burton recorded it in 1969.

Her next major work “Escalator Over the Hill” was inspired by the poetry of her friend and poet Paul Haynes. Referred to by many as a jazz opera, it was recorded between 1968 and 1971. Its cast of musicians included Charlie Haden, Sheila Jordan, Jack Bruce, Roswell Rudd, Linda Ronstadt, and then-husband Michael Mantler.

Carla’s compositions and recordings have been chronicled on Watt Records which she co-founded with Michael Mantler in the early 1970s.

She was selected by the National Endowment for the Arts as a Jazz Master in 2015, received a Guggenheim Fellowship for music composition in 1972, was awarded the German Jazz Trophy for “A Life in Jazz” in 2009, and given an honorary doctorate from the New England Conservatory of Music in 2014.

We’ll feature recordings by Carla as the leader ensembles both large and small plus include performances of her compositions by others including George Russell, Gary Burton, Kurt Elling, and Larry Goldings.

Tune in Wednesday, May 11 at 8 pm for music by Carla Bley on The Night Beat with your host Doug Crane. Only on KUVO JAZZ.