“Three Little Words” by Harry Ruby and Bert Kalmer was introduced in the 1930 comedy “Check and Double Check” which was based on the Amos ‘n Andy radio show. Duke Ellington and his Cotton Club Band were also featured. The strictures on racially integrated bands were such that two band members (Juan Tizol, who was Puerto Rican, and Barney Bigard, a Creole) were required to wear stage makeup to appear black. In addition, the song was performed by The Rhythm Boys (Bing Crosby, Harry Barris and Al Rinker) but mimed in the movie by Cotton Club Band members. Ironically, given later developments, Barris and Rinker were added after the director heard Crosby’s solo performance and said “This guy can’t sing”.

Harry Ruby (1895-1974) worked as a pianist in vaudeville and as a song plugger before joining with Bert Kalmar in 1920. Their first Broadway score was “Helen of Troy” in 1923 with the hit song “Who’s Sorry Now”, written with Ted Snyder. Their 1928 “I Wanna Be Loved by You” was first made famous by Helen Kane, the  “Boop-Boop-a-Doop” girl and was sung by Marilyn Monroe in the 1959 film “Some Like It Hot”. In Hollywood they scored five Marx Brothers movies and wrote several screenplays. Ruby retired after Kalmar’s death, focusing on family and community, with a few film roles. He and Kalmar were both inducted into the Songwriters Hall of Fame in 1970.

Bert Kalmar (1884-1947) started out in vaudeville working as a magician, song-and-dance man and juggler until a knee injury and his friend Ted Snyder propelled him into songwriting. A chance encounter with Harry Ruby then led to their long partnership writing sketches for Broadway revues, and scores for musical comedies before moving to Hollywood and the movies, where Kalmar also wrote scripts on screenplays, including “Bright Lights” and “Duck Soup”. The partnership of Ruby and Kalmer formed the basis for the 1950 movie “Three Little Words” starring Fred Astaire as Bert Kalmar and Red Skelton as Harry Ruby. 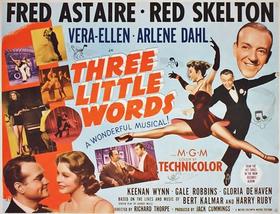