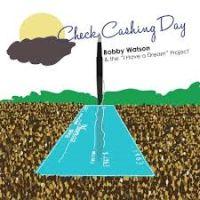 More than just a musical homage, Bobby used discourses by Martin Luther King, Jr. to spark is creativity composing most of the songs on the CD. Not only did Mr. Watson want to pay respect to that historic occasion at the nation’s Capital, but he also wanted to show that despite the great strides made in Civil Rights, there is still so much more work to do to assure that MLK Jr’s dream is fully realized.

During the past 30 years, Bobby has collaborated with bassist Curtis Lundy, initially as part of Horizon, then in the Latin jazz group The Jazz Tribe, and more recently in a more straight-ahead quartet/quintet setting. For the Check Cashing Day project, not only is Curtis playing some sizzling bass lines, but he also displays his compositional skills by contributing two tracks, MLK on Jazz (Love Transforms) and Revival (Ovedia).

The title of Bobby Watson & the “I Have a Dream Project” derives from the reason the March on Washington was organized: to cash a check,  a 100-year-old moral check that is still marked “non-sufficient funds.”

Dr. King was a jazz fan; many jazz musicians supported the Civil Rights movement. In 1964 after winning the Nobel Peace Prize, MLK wrote an essay for the Berlin Jazz Festival, “On the Importance of Jazz,” in part calling it triumphant music. Check Cashing Day is certainly a triumphant recording!