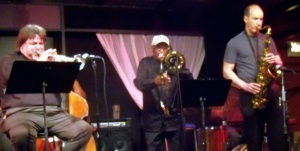 Curtis recorded with Colorado’s own Capri Records, 2 albums as a leader and another one as an accompanist for Keith Oxman, he also recorded a CD with Boulder’s Brad Goode.

In Addition to his recordings, Curtis Fuller played at Dazzle and over his long career appeared at several of the summer jazz festivals throughout the Rocky Mountains. See review

Finally, Curtis conducted a clinic at the Lamont School of Music. 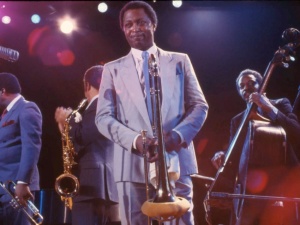 NPR Music, Martin Johnson – Trombonist and composer Curtis Fuller, a pivotal figure on his instrument since the ’50s and a beloved mentor, passed away May 8. He was 86. His death was confirmed by his daughter, Mary Fuller, and by the Jazz Foundation of America.

“His sound was massive, striking and immediate, a waveform that was calibrated to overload the senses and saturate the magnetic tape that captured it,” says trombonist and composer Jacob Garchik. “In our era of obsession with harmony and mixed meters, Curtis Fuller’s legacy reminds us of the importance of sound.”

Ryan Keberle, another current leading trombonist and educator, agrees. “Curtis Fuller’s genius can be heard in the warm and vibrant timbre of his trombone sound and the rhythmic buoyancy, and his deeply swinging sense of time.”

Fuller was born in Detroit on Dec. 15, 1934 and always remained exceptionally proud of his Motor City roots. His parents, who were from Jamaica, died when he was young – Fuller grew up in an orphanage, eventually taking up music in high school, first playing the baritone horn then switching to trombone at the age of 16. After graduation, he served for two years in the Army, and during this time played in bands with future luminaries like bassist Paul Chambers and alto saxophonist Julian “Cannonball” Adderley.

Upon returning home to Detroit in 1955, he began playing in a quintet led by reedman Yusef Lateef; that band travelled to New York in 1957 to record three albums, and it was there that Fuller’s impact began to widen dramatically. In his first nine months as a New Yorker, Fuller recorded eight times as a leader or co-leader and appeared as a sideman on 15 other recordings, including John Coltrane’s Blue Train (Blue Note), which the legendary saxophonist cited as one of his favorites.

Fuller’s big, broad tone added depth and breadth to the trumpet and saxophone front line that had become the convention in hard bop. Yet on his own recordings, Fuller branched out in unique ways – one of his first recordings, Bone and Bari (Blue Note), featured a frontline of Fuller and baritone saxophonist Tate Houston with a stellar rhythm section of pianist Sonny Clark, bassist Paul Chambers and drummer Art Taylor; the dark, evocative mood of its frontline highlighted the broad sound of Fuller’s instrument.

It was an unprecedented Motor City influx of the New York jazz scene. A short list of influential musicians includes Chambers and Lateef, trumpeter Donald Byrd, pianist Barry Harris, guitarist Kenny Burrell, pianist Tommy Flanagan, drummer Louis Hayes, baritone saxophonist Pepper Adams, bassist Ron Carter, tenor saxophonist Joe Henderson, and the Jones brothers – pianist Hank, trumpeter Thad, and drummer Elvin. Fuller often recorded with these great musicians, but he made canonical recordings with others too. He was a member of the first Art Farmer/Benny Golson Jazztet, and he played with Art Blakey and the Jazz Messengers for three and half years. Ryan Keberle cited Fuller’s solo on “One for One” from the album Ugetsu as one of his favorites.

Fuller’s solo on “One for One,” from Art Blakey and the Jazz Messengers’ album Ugetsu, is a standout in a career with no shortage of them.

“Fuller was strongly rooted in the fundamentals of blues, swing and bebop, and his improvisations balanced head and heart in compelling fashion,” said Mark Stryker, author of Jazz From Detroit. “He married a lickety-split technique with soulful expression, and even in his early twenties, he had a distinctive identity ideally suited for the hard bop mainstream.”

Fuller spent much of the late ’60s through the late ’80s touring with bands led by legends like Dizzy Gillespie and Count Basie, as well as performing with collective ensemble The Timeless All Stars. Like many of his peers, he joined the ranks of academia, teaching at the University of Hartford’s Hartt School, and was on the faculty of Betty Carter’s Jazz Ahead program at the Kennedy Center, where he mentored musicians like saxophonist Caroline Davis and bassist Dezron Douglas.

It was in Connecticut, during the mid-to-late ’80s, that trombonist and educator Steve Davis met Fuller and the two became friends. Davis often travelled to New York in the late ’80s to hear Fuller with either the Jazztet or the Timeless band. “Curtis’ playing was absolutely incredible… almost mystical,” Davis says. “Curtis always said, ‘I’m not trying to win any Trombone Olympics.’ We all knew he could, but loved him because it was never his concern to ‘out-play’ anyone. He played too pretty and hip for that. He was all music.”

What Makes a Good Jam Session?