“Venus Cruz has opened for artists such as Black Thought of The Roots, Saul Williams, Zap Mama, Goapele, Al Green, Guru, Vieux Farka Toure, Tinariwen and Bishop Desmond Tutu, to name a few. In 2015, Cruz organized, directed and performed, Billie Holiday Centennial Celebration at Denver’s Union Station, bringing in a record crowd. With deep improvisational skills and a soulful voice, Cruz has collaborated with artists hailing from many different genres of music. She is also the host and DJ for the internationally popular show “Jazz Odyssey” every Wednesday (10 p.m. to 12 a.m.) on KUVO Public Radio (kuvo.org) 89.3FM.”

Her current project, “What Young Men Do,” includes the talents of Mikey Smith(keys), Mark Emmons (drums) and Tim Philpott (bass). Within weeks of its start, the band played Denver’s UMS Festival, the Larimer Block Party (now Project Pabst) and opened for Grammy-nominated artists Hiatus Kaiyote and Emily King. This year she opened for Gregory Porter at The Chautauqua Amphitheater in Boulder, also played at Denver’s Museum of Contemporary Art (MCA) and City Park Jazz. Also in 2016, she performed in the Queen City Festival at the City Hall Amphitheater, and at the Chautauqua Community House as a special guest for their curated music series. 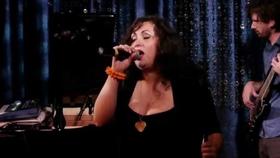