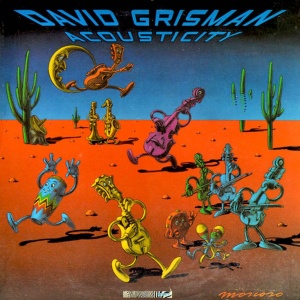 Mandolinist David Grisman developed his own musical style which he calls “Dawg Music.” It’s essentially a combination of American Bluegrass and American Jazz. All-American, so to speak. The Vinyl Vault takes a walk with some Dawg Music when we feature Grisman’s 1985 album “Acousticity,” a release on the Zebra record label.

In Grisman’s hands, Dawg Music is traditionally played with traditional bluegrass instruments. Grisman on mandolin is typically joined by acoustic bass, violin, and acoustic guitar, and such is the case on Acousticity. For this album, Grisman hired a full-time drummer in Hal Blaine. But this time around, the production didn’t stop there, an additional string section is employed and on at least two cuts, a three-piece horn section joins the festivities, led by James Brown alum Pee Wee Ellis.

Most of the tunes on Acousticity were written by Grisman, but other band members chipped in some compositions of their own. Each one is steeped in jazz and they swing to beat the band.

Plus, the album has a great cover.

Join Geoff Anderson for the next episode of the Vinyl Vault. You’ll be in for a toe-tappin’ time. It all happens this Tuesday, March 30, at 8:30 pm on KUVO JAZZ.