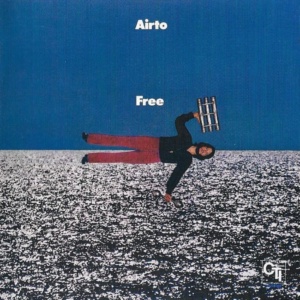 The Vinyl Vault features the debut album (more or less) from Brazilian percussionist Airto Moreira entitled “Free.” It’s a 1972 release on the CTI label. The album was released in the same year as Return to Forever released its first album, simply called “Return to Forever.” Airto was a member of RTF at the time and all of his RTF band mates joined him for the lead-off track on the “Free” album for a song entitled “Return to Forever” written by the leader of RTF, Chick Corea. Corea appears on that track, as does Airto’s wife, Flora Purim as well as the two other RTF members of that time, Joe Farrell on woodwinds and Stanley Clarke on bass. These players are augmented by a Don Sebesky-arranged horn section.

Other tracks on the album feature additional top-flight musicians, notably Keith Jarrett on piano on a couple of tracks. The album even features a Jarrett composition, “Lucky Southern.” Other guests include Hubert Laws, Ron Carter, George Benson and others.

Not surprisingly, the album has a strong Brazilian feel, but it mixes in healthy doses of jazz, funk and a little rock here and there. The flute playing of Joe Farrell and Hubert Laws is featured prominently throughout the album, giving it a light, airy feel.

Airto was literally on the scene at the birth of jazz fusion in the late 60s and early 70s. By the time Airto recorded “Free,” he had already been a member of Miles Davis’ band and was in the group for the recording of the seminal “Bitches Brew” album. He has also played on the first Weather Report album. And he was on Deodato’s classic recording of “Also Sprach Zarathustra” a/k/a “2001.” Besides having over two dozen albums under his own name, he has appeared on literally hundreds of other recordings over the years.

Check out Airto in his early days on the Vinyl Vault with host Geoff Anderson, Tuesday, August 25 at 8:30 pm on KUVO JAZZ.”