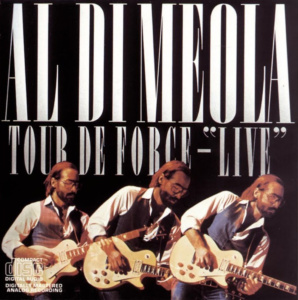 Guitarist Al Di Meola is slated to come through Boulder on Friday, February 3 and the Vinyl Vault takes a look at his live album from 1982 entitled “Tour De Force – Live” on Columbia Records. This was Di Meola’s sixth album. As of 2023, his album count is nearly 40. “Tour De Force – Live” features many superbly executed live versions of some of the popular tunes from his solo recordings up to that point.

The backing band consisted of some of the best fusion players from the late ‘70s to early ‘80s including Steve Gadd on drums, Jan Hammer on keys, Anthony Jackson on bass and Mingo Lewis on percussion. The album cover notes that all those musicians had played with Di Meola before, but that recording was the first time all of them had played together.

We’ll hear some Di Meola classics such as “Elegant Gypsy Suite,” “Race with Devil on Spanish Highway” and “Crusin’.” It’s a live album, but the production quality is first-rate and sounds like it easily could have been recorded in a studio.

Tune in for some live Al Di Meola on the Vinyl Vault with Geoff Anderson this Tuesday, January 31 at 8:30 pm on KUVO JAZZ.