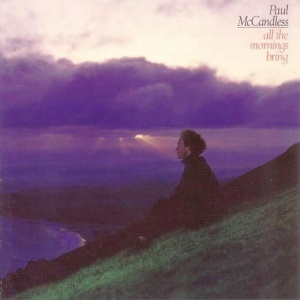 Next time on the Vinyl Vault, it’s the first solo album from Paul McCandless entitled “All the Mornings Bring.” Released in 1979 on Elektra Records, the album features some fine playing by Art Lande, Dave Samuels, and Eddie Gomez.

McCandless has been a long-time member of the band Oregon and this was his first chance to step out and record as a leader. He composed all the music on the album. McCandless can be heard on oboe, flute, whistles, English horn, and bass clarinet.

Many of the cuts are a trio format with McCandless, Lande, and Samuels. Others feature a larger ensemble of 9 or 10 players mostly on woodwinds and French horns. The McCandless-Lande-Samuels trio went on to record an album for ECM Records entitled “Skylight” in 1981.

The music is often referred to as “chamber jazz.” Much of the music on the album was composed in advance, but the “jazz” part of “chamber jazz” demands improvisation and McCandless left room for all the players to stretch out and place their own stamp on each tune.

Check out the Vinyl Vault with Geoff Anderson this Tuesday, July 13, at 8:30 pm on KUVO JAZZ.

This segment of the Vinyl Vault is sponsored by Vinyl Me, Please