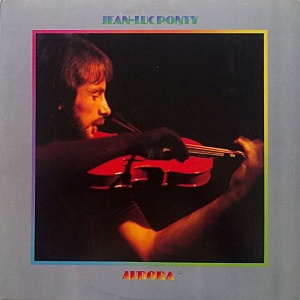 It’s a Vinyl Vault favorite, “Aurora” by violinist Jean Luc Ponty. Released in 1976, “Aurora” is considered one of Ponty’s best from his Atlantic Records years. This was his second album on the Atlantic label and he went on to record a total of a dozen for that label and over 40 overall as a leader.

“Aurora” features a stellar line-up with Darryl Stuermer on electric and acoustic guitars, Patrice Rushen on keyboards, Tom Fowler, a veteran of Zappa’s bands on bass, and Norman Fearrington on the drums. Ponty’s compositions are consistently both intricate and melodic and required frequent tightly arranged ensemble playing but, of course left plenty of space of improvisation. The album features one of Ponty’s perennial favorite compositions, “Renaissance” in its original iteration.

A Frenchman, Ponty began his training and early career in the classical realm. His attention was quickly drawn to jazz, influenced by Miles Davis and John Coltrane. He got into bebop playing clarinet and saxophone but eventually began to experiment with his violin in a jazz environment. Bebop eventually gave way to a rock-influenced sound when he began an association with Frank Zappa and then joined John McLaughlin’s Mahavishnu Orchestra. By the mid-70s he had landed his contract with Atlantic and embarked on his string of Atlantic releases which turned out to be his most popular albums.

Join Geoff Anderson this Tuesday for the Vinyl Vault at 8:30, only on KUVO JAZZ.