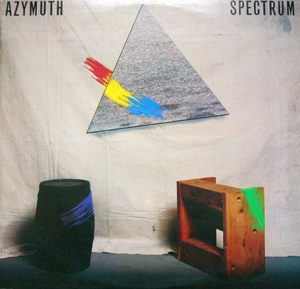 We have some Brazilian sounds coming up on the Vinyl Vault as we feature an album from the band Azymuth, their 1985 release “Spectrum.” Starting in the mid-70s, the band has been prolific in the studio recording at least 30 albums. This was their 11th album. They had a long string of records on the prestigious Milestone label and this was their seventh album for that imprint.

Throughout most of its career, Azymuth was mainly a trio consisting of Jose Roberto Bertrami on keyboards and percussion, Alex Malheiros on bass, guitar, vocal, and percussion, and Ivan Conti on drums and percussion. All three appear on this album along with guests Paulinho Olivera on flugelhorn and Sidney Moreira on additional percussion. One of the highlights of the album is the all-percussion piece “Turma do Samba” which features the entire band on percussion along with five additional guest percussionists.

Throughout its career, Azymuth was known for its unique blend of jazz, soul, and funk mixed into the samba of Brazil and this album continued that tradition.

Tune in to the sounds of Brazil, on the next Vinyl Vault with Geoff Anderson, on Tuesday, February 15, at 8:30 pm. Only on KUVO JAZZ.