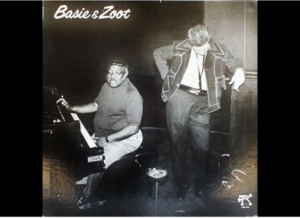 Count Basie may be best known for his swinging big bands and all the recordings laid down by that unit. However, William “Count” Basie also recorded many small group sessions, and we’ll hear one of those on the next Vinyl Vault when we present “Basie and Zoot.” Zoot, of course, is the inimitable Zoot Sims on tenor saxophone. This is a session from April 9, 1975, released on Pablo Records in 1976.

Basie on piano (and occasional organ) and Sims on tenor were joined by John Heard on bass and Louie Bellson on drums. As is the case with the vast majority of Pablo releases from the 1970s, this one is top notch both in terms of the playing and the recording quality. About half the tunes on the album are jazz standards such as “It’s Only a Paper Moon” and “Honeysuckle Rose” but the other half are original compositions by both Basie and Sims prepared especially for the session.

In the big band context, Basie’s playing is almost always drowned out by the roaring horn section and the players’ jostling for a chance to solo. Here, however, the bombast has been stripped away leaving only a quartet with plenty of room for Basie to stretch out and flex his improvisational muscles. Sims, obviously, steps out front for solos on every song as well and the counterpoint between the two players is nothing but a delight.

Check out Count Basie as the leader of a quartet on the Vinyl Vault with Geoff Anderson on Tuesday, October 19, at 8:30 pm. Only on KUVO JAZZ!