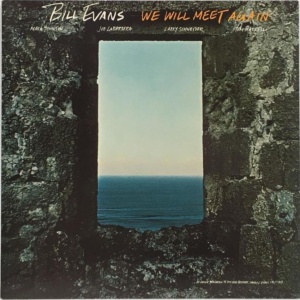 The next Vinyl Vault will feature the last studio album recorded by Bill Evans, “We Will Meet Again.” Released in 1980 on Warner Brothers Records, Evans dedicated the album to his older brother Harry who had committed suicide in 1979.

The jazz trio was Evans’ typical habitat, but this album found him in the larger expanse of a quintet. The rhythm section on this date proved to be the one that stayed with him until his death in September 1980. Marc Johnson played bass and Joe LaBarbera was the drummer. That trio was joined by an up and coming trumpeter named Tom Harrell. Larry Schneider played tenor and alto sax as well as flute. Evans even stepped out a bit and took a couple turns on the electric piano.

The horns add some tasteful contours to Evans’ music and often propelled the proceedings beyond typical piano trio territory. Harrell and Schneider, both relatively early in their careers at that time, played like they had something to prove bringing youthful energy to the session.

Check out “We Will Meet Again” on Tuesday, September 28, on the Vinyl Vault with Geoff Anderson at 8:30 pm on KUVO JAZZ.