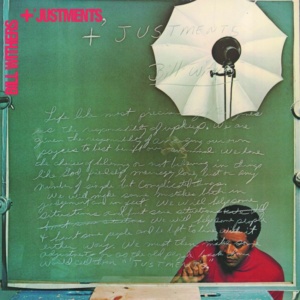 Bill Withers is known for his many hit songs that have been covered by a vast array of musicians; tunes like “Ain’t No Sunshine,” “Lean on Me” and “Use Me.” He also recorded his own songs on several albums, mainly in the 1970s and we’ll hear one of those on the Vinyl Vault this week. We’ll feature the 1974 album, “+’Justments” originally released on the Sussex label.

“+’Justments” was somewhat overlooked and hard to find for many years, in part because Sussex went out of business shortly after the album was released. But thanks to Vinyl Me Please, the Vinyl Vault has a copy. It’s a collection of Withers songs with his unique take on life and love, mainly the lost side of love. Recorded the same year as he divorced Denise Nichols whom he had married only a year earlier, the songs address the sadness, blame, attempts to move on, and regret that come with this territory.

Musically, the Withers tunes are anchored by a rhythm section composed of Melvin Dunlap on bass and James Gadson on drums who, together, plow deep grooves on many of the tracks. Jose Feliciano sits in on guitar and even conga. Dorothy Ashby adds her harp to some of the songs. And, of course, Withers and his mellow but world-weary voice stands out front. Withers also adds guitar and keyboards throughout.

Join Geoff Anderson for the Vinyl Vault on Tuesday, December 28, at 8:30 pm on KUVO JAZZ.