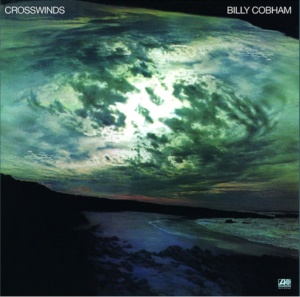 Drummer Billy Cobham just announced the post-COVID resumption of the Crosswinds Project tour. What better excuse to feature his 1974 fusion classic, “Crosswinds” on the Vinyl Vault? The album was released on Atlantic Records and featured John Abercrombie on guitar, Michael Brecker on tenor sax, Randy Brecker on trumpet, George Duke on keyboards, Garrett Brown on trombone, and John Williams on bass.

All the music on the album was composed by Cobham, including the 17-minute “Spanish Moss Suite” that comprises side one. Side two features three more Cobham originals including the classic title track.

Cobham first came to prominence by touring with Horace Silver’s band in the late 60s, but then joined forces with Miles Davis for albums like “Live Evil” and “A Tribute to Jack Johnson.” From there, he became a part of one of the seminal jazz-rock units, the Mahavishnu Orchestra. His solo career started with the 1973 album “Spectrum” and “Crosswinds” followed a year later.

In 2019, Cobham put together the “Crosswinds Project” as a touring band to celebrate his 75th birthday and to recreate that album and other music of the era. Like so many things, the tour was cut short by COVID. But the Project is back and is scheduled to play Denver in September.

You can check out “Crosswinds” on Tuesday, May 10, with Geoff Anderson on the Vinyl Vault at 8:30 pm on KUVO JAZZ!