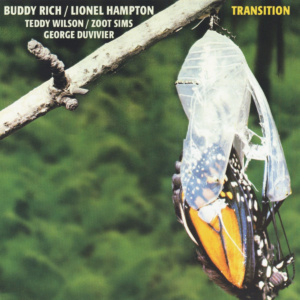 The transition referenced in the album title is the evolution of jazz that was underway in the mid-1970s. Side one of the album contains the type of music Rich and Hampton cut their teeth on and are primarily remembered for. As an example, the band covered “Air Mail Special,” a staple from Hampton’s days with Benny Goodman. Side one tunes are based on the blues and generally emit a traditional swinging jazz vibe. Side two has only two tracks and they both update Rich’s and Hampton’s sound with a dose of funk and some rock rhythms. Tuesday night, we’ll sample tunes from both sides.

Joining Rich and Hampton on side one are Zoot Sims on tenor sax, Teddy Wilson on piano, and George Duvivier on bass. Side two features an expanded band with players like Kenny Barron on piano, Sal Nistico on tenor, Anthony Jackson, and Bob Cranshaw both on bass and others.

Join Geoff Anderson on Tuesday, November 15 at 8:30 pm for “Transition” on the Vinyl Vault on KUVO JAZZ.