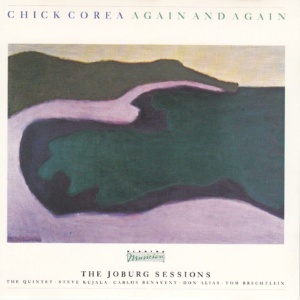 This Week the Vinyl Vault continues its remembrance of Chick Corea by featuring his 1983 album “Again and Again; The Joburg Sessions” on the Elektra Musician label. Corea passed away on February 9, at age 79.

“Again and Again” was recorded in Johannesburg, South Africa while the band was on tour there in 1982. The band sandwiched this session into an afternoon before an evening concert. It’s essentially a “live” recording in the studio with no overdubs. At the time, Corea was joined by Steve Kujala on flute and tenor and soprano saxes; Carles Benavent on electric bass; Don Alias on percussion, and Tom Brechtlein on drums.

The album features six original Corea compositions, some of which were written on that tour and shortly before the session. Others had been percolating for some time and finally were put down on recording tape.