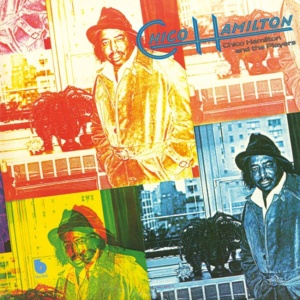 September 20 is the 100th anniversary of percussionist Chico Hamilton’s birth. To mark the occasion, the Vinyl Vault will feature a 1976 album from him entitled “Chico Hamilton and the Players.” This Blue Note album was about the mid-point in his eventual release of over 60 albums.

Much like Art Blakey and Miles Davis, Hamilton had a knack for spotting young jazz talent, assembling them, and letting them rip. The aptly named “Chico Hamilton and the Players” is a good example of that. Several future jazz stars and band leaders played on this album including Steve Turre on electric bass and bass trombone, Black Arthur Blythe on alto and soprano saxophones, and a 19-year-old Rodney Jones on guitar. Rounding out the band were Will Connell, Jr. on alto sax and Abdullah on conga and additional percussion.

Released in the midst of the early fusion era, the album is difficult to pigeonhole because of its varied styles, textures, and influences. “Ode to Miles” is a bolero-like piece, brooding and evocative, building to a climax. “Abdullah’s Delight” had the entire band on one percussion instrument or another (along with some bass and guitar). “Sex is a Cymbal” was a spontaneous studio jam between Hamilton and Turre.

Also this Tuesday, we’ll hear a couple of cuts from Hamilton’s 1958 Warner Brothers album “Gongs East!” featuring a very young Eric Dolphy on flute and bass clarinet along with some jazz cello by Nathan Greshman.

Check out Chico Hamilton and the Players, on the Vinyl Vault with Geoff Anderson on Tuesday, September 21, at 8:30 pm on KUVO JAZZ.