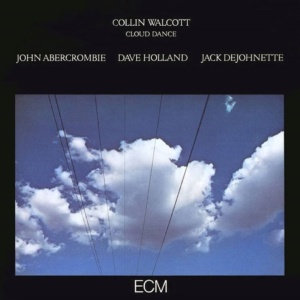 This week’s Vinyl Vault ventures back into ECM territory with a 1976 album by Collin Walcott entitled “Cloud Dance.” The album, Walcott’s first solo record, was recorded in March 1975 and released the following year on the ECM record label. The supporting crew is John Abercrombie on guitar, Dave Holland on bass and Jack DeJohnette on drums; a trio that was known at the time as Gateway.

Although not of Indian extraction, Walcott played the traditional Indian instruments of sitar and tabla. The musicians were all top-flight and leaders in their own right. They came together and mixed the eastern and western sounds to create something like acoustic jazz-fusion with an Indian twist. Abercrombie’s ethereal electric guitar, floating above and around Walcott’s sitar is particularly effective in creating a dreamy, cloud-like ambience on several tunes. On the cut “Prancing,” Walcott on tabla and Holland on bass put the “dance” in “Cloud Dance” with a particularly energetic and, yes, danceable performance.

Collin Walcott first came to prominence with the Paul Winter Consort in the late 1960s. He and three of his compatriots from that band went on to form the band Oregon. He learned his Indian instrument skills by studying under literally the best. He studied the sitar with Ravi Shankar and the tabla with Alla Rakha, master tabla player and father of Zakir Hussain. Not long after recording “Cloud Dance,” Walcott went on to form the highly influential band Codona with Don Cherry and Nana Vasconcelos. Walcott was born in 1945 in New York City and tragically died in a bus accident in Magdeburg, East Germany in 1984 at the age of 39.

Join Geoff Anderson this Tuesday, October 6, at 8:30 pm to hear several cuts from this unique album on the Vinyl Vault. Only on KUVO JAZZ.