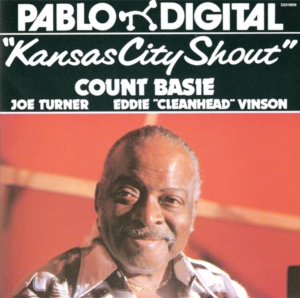 The blues shouter was a type of singing that evolved in the days before good quality public address systems, or before there was any such thing as a PA system. Without amplification, singers had to project over the sound of the band. In the case of a big band such as Basie’s, it took some serious pipes. Turner and Vinson are two of the best-known practitioners of this sub-genre having gotten their start in the early days of jazz in the first half of the 20th Century.

“Kansas City Shout” was recorded in 1980 when there was plenty of amplification, and high-quality recording equipment as well. On the album, Turner and Vinson took turns as the vocalist, usually in front of the big band, but occasionally with just the band’s rhythm section. Besides his distinctive vocals, Vinson also contributed his alto sax playing on some cuts.

And, one of the most important features of this record is that it was pressed on dazzling red vinyl! Check it for yourself on the Vinyl Vault with Geoff Anderson, Tuesday, August 9, at 8:30 pm on KUVO JAZZ.