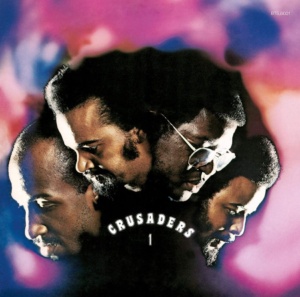 Fifty years ago this month, Carole King released her album “Tapestry.” The album ended up selling over 14 million copies and became the soundtrack to many a baby boomers’ adolescence and early adult-hood. One of several hits from that album was “So Far Away” which was picked up by the Crusaders the following year and turned into an epic 12 minute celebration of solos and ensemble playing.

The Crusaders began their musical life in the 1960s known as the Jazz Crusaders playing bebop and soul-infused jazz. By the early 70s they switched to a funkier, slicker sound and dropped “Jazz” from their moniker. Their first album as the stripped-down “Crusaders” was “Pass the Plate” for the Chisa/Verve label. Shortly after that album was released, they signed with the Blue Thumb label and released “1” which is the album we’ll hear this week on the Vinyl Vault. Although “1” wasn’t their first album as the Crusaders, 49 years later, it’s still mistaken as their first.

“1” features the four original players: Joe Sample on keyboards, Stix Hooper on drums, Wilton Felder on tenor sax and electric bass and Wayne Henderson on trombone. They’re joined by a guitar triumvirate of Larry Carlton, Arthur Adams and David T. Walker. Rounding out the lineup is Chuck Rainey on electric bass. The front line sound of Felder’s sax and Henderson’s trombone is prominent throughout the album, but the guitars play what was then a new role in the sound of the band.

“So Far Away” is the only cover on this double album with the rest being band originals. These include “Put It Where You Want It” by Sample which was recorded by the band several other times over the years.

Join Geoff Anderson for some early Crusaders including “So Far Away” this Tuesday, February 16, at 8:30 pm on the Vinyl Vault on KUVO JAZZ.