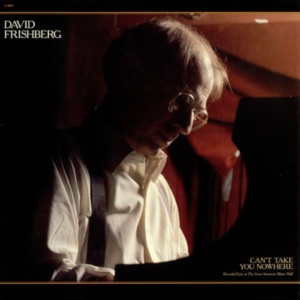 The Vinyl Vault goes to the quirky side with David Frishberg’s 1987 album “I Can’t Take You Nowhere” released on Fantasy Records recorded live at The Great American Music Hall in San Francisco on September 21, 1986. It’s a solo album, just David and his piano. And his clever lyrics.

Cut from the same cloth as Mose Allison and Bob Dorough, Frishberg has been known for his humorous lyrics and creative turns of phrase. This album includes the first recording of “I Can’t Take You Nowhere” which turned out to be one of his more popular tunes over the years. This album also features a version of probably his best-known song, “My Attorney Bernie.” Frishberg also pays tribute to two of his songwriting heroes, Frank Loesser and Irving Berlin with medleys by both those composers. Another strong influence on Frishberg has been Duke Ellington and he includes two Ellington tunes on the program. Not all of the songs feature Frishberg’s distinctive vocals, he also shows off his piano skills on a couple of instrumentals.

Check out the Vinyl Vault with Geoff Anderson, this Tuesday, March 9, at 8:30 pm on KUVO JAZZ.