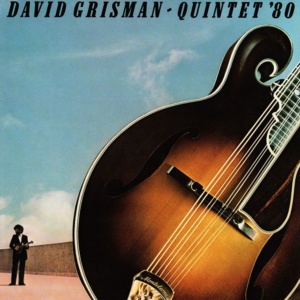 String-time in springtime; that’s the concept on the Vinyl Vault as we check out David Grisman – Quintet ’80. The album was released in 1980 on Warner Brothers records and featured nothing but string instruments.

This may have been Grisman’s best band in all of his long career. Besides Grisman on mandolin, the band included Darol Anger on violin, cello, and violectra; Mike Marshall on mandolin, guitar, and violin; Mark O’Connor on guitar and violin; and Rob Wasserman on bass. Each is a virtuoso on his instruments, and they were in top form on this record. In short, these are some of the finest musicians whoever sawed, picked, or strummed a set of strings. Each member of the band went on to lengthy and notable careers.

Most of the tunes were composed by Grisman, but the album also includes a cover of John Coltrane’s “Naima.” Grisman has always been a master of collecting many different genres and flavors of music which he mashed together and called “Dawg Music.” Although the instrumentation on the album is more typical of a bluegrass lineup, the music bears only a passing resemblance to that style. Jazz, and particularly swing, form the backbone of this music. But the influences don’t stop there, Grisman credits L.V. Beethoven for a portion of one of the tunes.

This one’s hard to get, it was never released on CD and has been out of print for 30 years, but the Vinyl Vault has a copy of this record and you can check it out, on Tuesday, April 12 at 8:30 pm with host Geoff Anderson. Only on KUVO JAZZ!