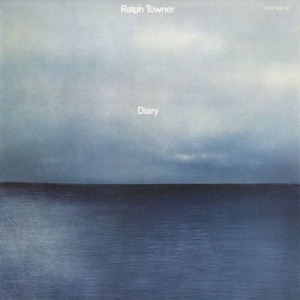 This week the Vinyl Vault features the second album from guitarist Ralph Towner, “Diary.” Recorded in 1973, it was released on the ECM label in 1974. Although Towner is the only musician on the album, most tracks were overdubbed, often with Towner accompanying his guitar playing with piano. One track even features gongs! The piano is acoustic and his choice of guitars includes the acoustic 12-string and classical.

With the exception of one track whose composer is “anonymous,” all tunes on the album were composed by Towner. The album includes two compositions also recorded by Towner’s band Oregon: “The Silence of a Candle” and a tune that comes the closest to a hit in the Towner repertoire, “Icarus.”

The album mixes influences from the worlds of jazz, classical music and even Brazilian music. It’s a quiet, cerebral album and the music often has an intimate quality appropriate for an album entitled “Diary.” It’s been described as a classic rainy day album and music to help you temporarily check out from the rat race of modern living.

Towner first came to prominence as a member of the Paul Winter Consort in the late 1960s. Also in the band at that time were Glenn Moore, Colin Walcott and Paul McCandless. Towner, along with those three, went on to form the band Oregon in 1970. That’s a band that’s still around. Despite that band’s longevity, all the band members continually have been involved in side projects and solo work. Towner has recorded at least 26 albums under his own name, either solo or with various other musicians and bands. Most of these recordings have been on the ECM label. With Oregon, he’s recorded nearly 30 more albums and he’s appeared on dozens of albums by other artists as a sideman.

Check out “Diary” from this highly regarded musician, Tuesday, July 21 at 8:30pm on the Vinyl Vault, only on KUVO JAZZ.