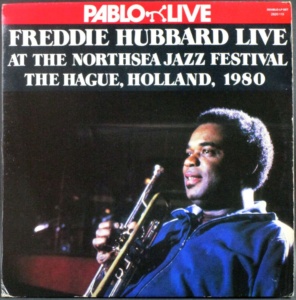 Some live Freddie Hubbard is on tap this week on the Vinyl Vault as we hear some tracks from a double album on Pablo entitled “Live at the Northsea Jazz Festival, The Hague, Holland 1980.” Besides Hubbard on trumpet, the band featured David Schnitter on tenor saxophone, Billy Childs on keyboards, Larry Klein on bass, and Sinclair Lott on drums.

The double album contains only six tracks as the band stretched out to explore every nook and cranny of the compositions. The length of the tunes means we’ll probably only have time to hear a couple of them, but “First Light” and “Red Clay” are especially tasty.

Schnitter, on tenor, is a little-known player, but on this album he turned it loose, playing with abandon and an intensity to match the leader. Larry Klein played electric bass throughout and later went on to marry and produce albums for Joni Mitchell. Hubbard got back to the basics on this album after a mid-70s dalliance with fusion.

Check out some live, straight-ahead Freddie Hubbard with Geoff Anderson, on Tuesday, February 8, at 8:30 pm on the Vinyl Vault on KUVO JAZZ.