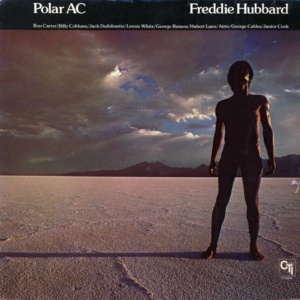 Like so many of the top jazz artists of great longevity, Freddie Hubbard recorded for many different record labels over the years. And like many of his contemporaries, that included a stint at Creed Taylor’s CTI label. Hubbard recorded five studio albums for the label and after he left in 1974 for Columbia, CTI pulled together a compilation album of previously released and unreleased tracks and issued “Polar AC.”

Vinyl Vault will feature some tracks from “Polar AC” including the 13-minute tour de force, “Son of Sky Dive” and others. The album features many of the usual CTI suspects including George Benson, Hubert Laws and Ron Carter. Because the album is drawn from a number of different sessions recorded over the course of at least three years, the personnel varies by track. But other guests include Junior Cook, Jack DeJohnette, George Cables, Billy Cobham, Lenny White, Airto and more.

Hubbard recorded over 60 albums as a leader during his long career and appeared on many more as a sideman, having spent time in Art Blakey’s Jazz Messengers. He also appeared on several albums by John Coltrane, Benny Golson, Herbie Hancock, Bobby Hutcherson, Milt Jackson, Quincy Jones, Wayne Shorter, McCoy Tyner, Randy Weston, and even one by Billy Joel.

Hubbard was in top form for these sessions with a powerful tone and expressive, inventive solos. Hear it all on the Vinyl Vault, Tuesday, February 2, at 8:30 pm on KUVO JAZZ.