Vinyl Vault — Freddie King, “My Feeling for the Blues” 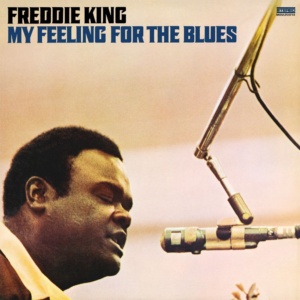 Next time on the Vinyl Vault it’s a blues blast with a 1970 album from Freddie King entitled “My Feeling for the Blues.” The album was released on the Atlantic subsidiary Cotillion Records and was produced by King Curtis.

King wrote a couple of the songs on the album, but most are covers of blues standards. Throughout, King delivers his heartfelt, stirring vocals and, most importantly, punctuates every song with his piercing, slashing, biting guitar, a sound often emulated, but never quite copied. Indeed, King’s guitar playing has served as an inspiration for countless blues and rock guitarists for over a half-century now.

Many of the tracks feature a full horn section that included the likes of George Coleman, Frank Wess, Willie Bridges, and Ernie Royal. And those horns were arranged by Donnie Hathaway. King Curtis appears on sax and on bass marimba on two of the tracks.

While BB and Albert are the other “Kings of the Blues” who are better known than Freddie, this King had his own style and stamped his own mark on this foundational music that is so important to so much of modern music.

Check out “My Feeling for the Blues” with host Geoff Anderson on Tuesday, April 5 at 8:30 pm on the Vinyl Vault, only on KUVO JAZZ. This album is provided by Vinyl Me Please.