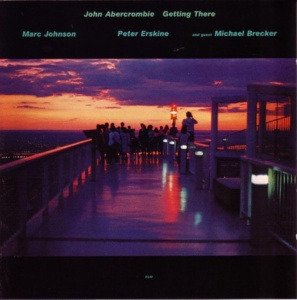 John Abercrombie will provide the next Vinyl Vault feature with his 1988 album, “Getting There.” The album was released on the ECM label and featured a rhythm section that was a veteran of many Abercrombie dates, namely Marc Johnson on bass and Peter Erskine on drums. That trio is joined on several tracks by Michael Brecker on tenor saxophone.

Since the album is on ECM, you’d expect lots of dreamy, introspective soundscapes and you’d be right. Many tracks set exactly that mood. But others are much more lively, especially those featuring Brecker and his relentless, irrepressible tenor attack. Abercrombie is heard on a variety of guitars including acoustic and electric and also on guitar synthesizer achieving a sound similar to Pat Metheny on that same instrument.

Abercombie composed all but two of the tunes on the album. One of the tracks was composed by Johnson, “Furs on Ice” which later appeared on a live album featuring this trio. The remaining track is a Vince Mendoza composition, “Thalia.”

Join Geoff Anderson for this varied and intriguing guitar album on the Vinyl Vault, this Tuesday, August 31,  at 8:30 pm. Only on KUVO JAZZ.