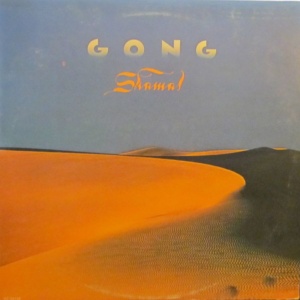 The Vinyl Vault features a jazz rock/progressive rock mash-up in the form of the 1975 album “Shamal” by the band Gong. The album was released on Virgin Records and drew from musical influences from all over the world.

Gong was one of those English bands that seemed to go through constant personnel changes. “Shamal” was the band’s sixth album and by that time many members had come and gone. The “Shamal” lineup moved the band towards a jazzier sound than it had previously exuded. Pierre Moerlen on drums, vibes and tubular bells would keep the band on that trajectory on subsequent albums.

Standing shoulder to shoulder with the jazz rock influence, progressive rock played a key role. A primary aspect of that influence was that each of the six songs amounts to a mini symphony with twists and turns that take these tunes far from their initial point of embarkation. Some of the tracks have a definite Frank Zappa feel, particularly when Mireille Bauer lets loose on marimba or glockenspiel, sounding like long time Zappa collaborator Ruth Underwood.

Besides the influences of American jazz and rock, “Shamal” mined rich musical veins from the Middle East, Japan and Africa.

Check out this sometimes surprising, always innovative album on the next Vinyl Vault with Geoff Anderson on Tuesday, October 12, at 8:30 pm. Only on KUVO JAZZ.