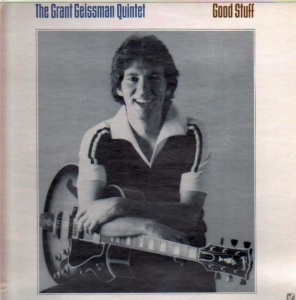 On the Vinyl Vault, it’s a 1978 album from guitarist Grant Geissman entitled “Good Stuff.” The album was released on Concord Jazz and was the first of about 14 albums Geissman has released as a leader.

“Good Stuff” came out when Geissman was playing in Chuck Mangione’s band when that outfit was at its commercial peak. Geissman played on “Feels So Good” which sold over two million copies. For “Good Stuff,” Geissman took a more straight-ahead approach.

He was joined on the album by Tom Rainier on keyboards, Bob Magnusson on bass, Steve Schaeffer on drums, and a young Gordon Goodwin on sax. Geissman and Goodwin were students together at Cal State Northridge shortly before they recorded “Good Stuff.”

The album features a combination of originals, such as the title track, as well as standards such as “All Blues,” “Road Song,” “The Shadow of Your Smile” and “There Will Never Be Another You.” Of particular note is Giessman’s “Mambo’s Guava-Sava Samba.”

Besides recording albums as a leader and working with Mangione on a couple of different occasions, Geissman has been a member of Gordon Goodwin’s Big Phat Band and is a busy session musician. He has recorded music for numerous television shows including Dawson’s Creek, Boy Meets World, Two and a Half Men, and Monk.

Check out Grant Geissman with Geoff Anderson on the Vinyl Vault, Tuesday, June 1, at 8:30 pm on KUVO JAZZ.