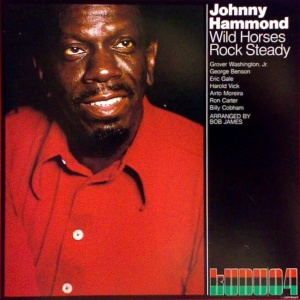 The Vinyl Vault gets down with the funky organ of Johnny Hammond and his 1972 session “Wild Horses Rock Steady.” The album was an early release on the Kudu record label, a subsidiary of Creed Taylor’s CTI label.

Johnny Hammond, also known as Johnny “Hammond” Smith was a prolific organist in the mid-20th Century, recording over 35 albums under his own name from 1958 through 1978. He started in the hard bop realm, but by the early 70s was gravitating toward a funkier sound making his signing with Kudu in 1971 a natural progression.

For “Wild Horses Rock Steady,” Kudu lined up some of its top players including George Benson, Grover Washington, Jr., Snooky Young, Pepper Adams, Ron Carter, Billy Cobham and Bernard Purdie among others. The song selection drew from the pop music of the day including the title tracks “Wild Horses” by Jagger and Richards and Aretha Franklin’s “Rock Steady.” Others include “I Don’t Know How to Love Him” from Jesus Christ Superstar, and “It’s Impossible.” Hammond and crew take each one and dig a deep, undeniable groove.

Join Geoff Anderson on Tuesday, April 13, for the Vinyl Vault at 8:30 pm on KUVO JAZZ.