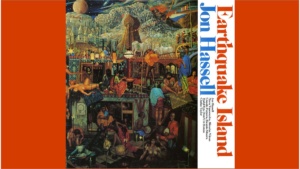 Trumpeter Jon Hassell passed away this past June at the age of 84 leaving a rich and diverse musical legacy. On Tuesday, on the Vinyl Vault, we’ll remember Jon Hassell as we listen to tunes from his 1978 release on Tomato Records entitled “Earthquake Island.”

The album features veterans of the band Weather Report as well as Miles Davis’ band and the record exudes a rhythmic vibe straight out of those musical units. Miroslav Vitous on bass and Dom Um Romao of Weather Report are joined by Davis veteran Badal Roy on tabla. Also featured are Nana Vasconcelos on percussion, Claudio Ferreira and Ricardo Silveria on guitars and Clarice Taylor on vocals.

Hassell is probably best known for his experimental works and his “Fourth World” music. He worked with Brian Eno on a number of releases. He also appeared on many rock albums by groups such as the Talking Heads, Tears for Fears and Peter Gabriel. He was often categorized as a World Beat artist, a label he didn’t necessarily embrace. Yet, “Earthquake Island” falls squarely in that slot with its multi-faceted percussion and driving beats.

Not content with the unfiltered sound of the trumpet, Hassell was known for running his horn through many different types of synthesizers. “Earthquake Island” is no exception where his straight up trumpet sound alternates with breathy, ethereal and sometimes harmonized lines. The late 70s was also a time of widespread synthesizer experimentation in general and Hassell works the synthesized keyboards on “Earthquake Island” as well.

“Earthquake Island” was the second of about 18 albums he released under his own name, but he appeared on about three times that many in a sideman role. Besides the earthy world music of “Earthquake Island” and the ambient, experimental sounds of his Fourth World projects, he also experimented with hip hop and other genres.

Check out Jon Hassell’s “Earthquake Island” with Geoff Anderson on the Vinyl Vault on Tuesday, November 16 at 8:30 pm on KUVO JAZZ.