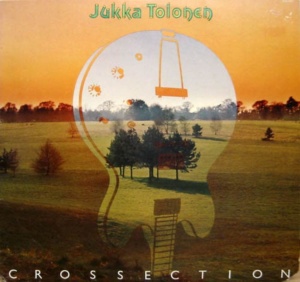 Next up on the Vinyl Vault, it’s Finnish fusion from guitarist Jukka Tolonen and his 1975 album “Crossection.” The album was released on Janus Records, a division of Chess Records, the famous Chicago blues label. The album is a compilation of previously issued tracks recorded in the early 1970s. The backing musicians were primarily from Finland and Sweden and came from other Northern European bands of the time including Wigwam and Tolonen’s own Tasavallan Presidentti.

Tolonen composed all of the music on the album which ranges from a laid back walk-in-the-park vibe to more intense fare. Much of the music evidences a significant influence of the progressive rock of the day with many intricate passages and tunes that move through many passages like mini symphonies. Jazz-rock fusion is, however, the predominant influence on the album.

Tolonen was quite prolific in the 20th century and early in this century releasing nearly 50 albums under his own name or as a member of several bands. Although still with us, Tolonen no longer plays guitar due to osteoarthritis, but has been known to perform on piano and bass guitar.

Check out the Vinyl Vault with Geoff Anderson on Tuesday, August 2, at 8:30 pm for Scandinavian fusion. Only on KUVO JAZZ, the Oasis in the City!