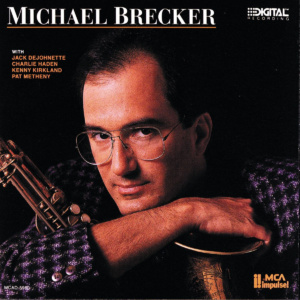 On the Vinyl Vault, we’ll give a listen to the first album from tenor sax man, Michael Brecker (March 29, 1949 – January 13, 2007). The album is simply called “Michael Brecker” and was released on the MCA Impulse! label. Brecker didn’t get around to recording his first solo record until relatively late in his career. This album was issued in 1987. By that time, he had already appeared on nearly 400 albums as a studio musician, formed the band Dreams in the early 1970s, a highly influential early fusion unit, played in the Brecker Brothers with his brother, trumpeter Randy Brecker and formed another influential band, Steps Ahead.

Obviously, Brecker was wired into the music industry by 1987 and his backing band on this album reflected his ability to attract the very best in the business. Brecker was joined by Pat Metheny on guitar, Jack DeJohnette on drums, Charlie Haden on bass, and Kenny Kirkland on keyboards. Don Grolnick produced the record. The album features several original compositions by Brecker as well as some by Grolnick and Mike Stern.

The album is mostly an acoustic affair, but Brecker also played the EWI or electronic wind instrument which he had been experimenting with at the time. Although each band member was a leader in his own right, the group came together as a solid unit for some tasty ensemble playing and, of course, delicious solos, especially by the leader who uncorked a continual stream of rich and often intense musical ideas.

Join Geoff Anderson for the first Michael Brecker album on Tuesday, November 22 at 8:30 pm on the Vinyl Vault and KUVO JAZZ!

Vinyl Vault — Miles Davis, “The Man with the Horn”