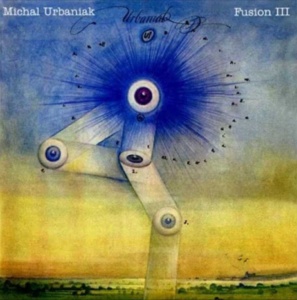 The Vinyl Vault presents some mid-70s fusion with a European twist when we’ll listen to a 1975 album from violinist Michal Urbaniak entitled “Fusion III.” Urbaniak, who hails from Poland, immigrated to the U.S. in 1973 and quickly joined the New York fusion scene.

“Fusion III” features performances from several of Urbaniak’s compatriots as well as a number of highly regarded American musicians. For instance, both John Abercrombie and Larry Coryell each play a number of prominent guitar solos. The rhythm section locks down a solid and often funky foundation with Alphonso Johnson on bass and Steve Gadd on drums. Also on the album is Urbaniak’s then-wife Ursula Dudziak on vocals, often doubling Urbaniak’s violin on complex and incendiary melodic runs. Wlodek Gulgowski is the keyboard player on the date on electric piano, Moog synthesizer and organ.

Urbaniak is often compared to Jean Luc Ponty both because of their similar fusion style and because of their violin sounds. Urbaniak used a custom-built 5 string violin at the time and often ran it through synthesizers and other processors. Another parallel is both violinists have been quite prolific with Urbaniak’s discography now numbering well over 50 albums under his own name and as a sideman on many more. He has played with artists as diverse as Oliver Nelson, Scott Cossu, Paul Bley, Billy Cobham, Don Pullen, Miles Davis and many others.

“Fusion III” has a bit of an early Return to Forever sound to it; especially with Dudziak’s vocals who sounds like a Polish Flora Purim. Alphonso Johnson on bass lays down more funk than early RTF was known for. The album deploys numerous unconventional time signatures and frequent time changes to keep listeners on their toes.

Tune in to The Night Beat with Geoff Anderson on Tuesday, December 22 at 8 pm and check out the “Vinyl Vault,” at 8:30 pm. Only on KUVO JAZZ.