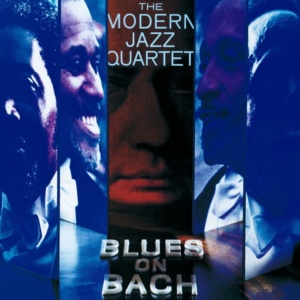 Jazz players have been influenced by and have covered JS Bach since nearly the beginning of jazz. Improvising jazz artists have spotted a kindred spirit with Bach’s famous variations. The Modern Jazz Quartet with pianist John Lewis and his propensity for chamber jazz was an obvious candidate for further explorations of melding jazz and Bach.

The MJQ did exactly that on its 1974 album “Blues on Bach” released on the Atlantic label. Lewis reworked five familiar Bach melodies for himself and his jazz quartet. Lewis and vibes player Milt Jackson added four jazz/blues original compositions and then alternated the Bach and blues throughout the album. Lewis and Jackson were, of course, joined by Percy Heath on bass and Connie Kay on drums.

Lewis, normally a piano player, switched to harpsichord on the Bach pieces to evoke a bit of the Baroque. Jackson stays on his vibraphone throughout and the harpsichord – vibes combination is something rarely heard in jazz.

It will be an elegant evening of Bach and blues this Tuesday, December 21, at 8:30 pm on the Vinyl Vault. On KUVO JAZZ!