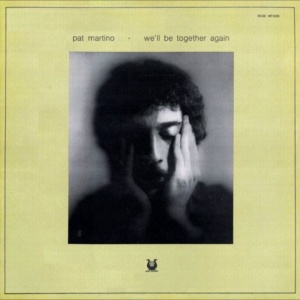 We lost guitarist Pat Martino on November 1 at the age of 77. He left a rich recorded legacy, and we’ll hear selections from one of his albums on the next Vinyl Vault. “We’ll Be Together Again” was released in 1976 on the Muse label and featured Gil Goldstein on electric piano accompanying Martino’s electric guitar.

The album is quiet and introspective, featuring primarily ballads. Goldstein solos occasionally, but primarily serves as backing for Martino’s gentle excursions. Covers of classic tunes make up the bulk of the program, including “Willow Weep for Me,” “Send in the Clowns,” “Dreamsville” and “You Don’t Know What Love Is,” among others. The exception is the lead-off track, a 15 minute medley entitled “Open Road” which comprises two Martino compositions and one by Goldstein.

Martino’s personal story is one of both tragedy and triumph. Within a few years after recording “We’ll Be Together Again” Martino suffered a brain aneurysm that nearly killed him. Although he survived, the damage to his brain wiped out his memory of how to play the guitar. Determined, however, not to let this be a permanent setback, he relearned guitar and once again became a professional jazz musician.

Tune in to the Vinyl Vault with host Geoff Anderson as we remember Pat Martino, on Tuesday, November 9, at 8:30 pm on KUVO JAZZ.