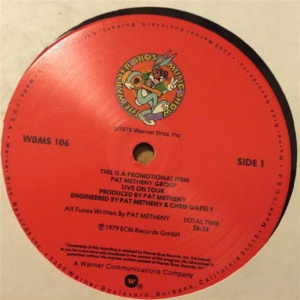 The album is an early document of the Pat Metheny Group featuring its original lineup of Lyle Mays on keyboards, Mark Egan on bass, Danny Gotlieb on drums and of course Metheny on guitars. The album features tunes from the first Pat Metheny Group album as well as their second album, “American Garage” and some miscellaneous songs as well, including the song “Unity Village” which Metheny didn’t record and release until years later and then, outside the group setting. “Unity,” of course, has been a recurring theme with Metheny. Two of his post-Pat Metheny Group bands were named the Unity Band and the Unity Group.

The sound on this recording is a bit raw and isn’t mixed the way a polished, professional release would be, but it captures the moment including some between song banter by the leader.

Check out this Pat Metheny Group recording that you probably haven’t heard on the next Vinyl Vault with Geoff Anderson, Tuesday, October 5 at 8:30 pm on KUVO JAZZ.