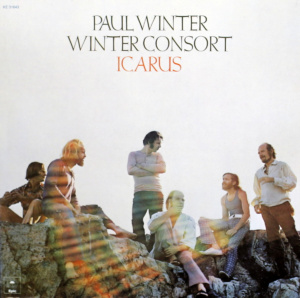 On the next Vinyl Vault, it’s the most revered album from the venerable Paul Winter Consort, “Icarus,” released in 1972 on Epic records. It was a groundbreaking record in terms of the instrumentation and overall sound of the record. It was a fusion of jazz, classical and world music. The musicians seemed to go out of their way to try to include as many different instruments as possible. Some of the instruments included, soprano saxophone, cello, oboe, English horn, contrabass, Sarrusophone, classical guitar, 12-string guitar, piano, bush organ, fender bass, tabla, sitar, marimba and more.

This was one of the most notable lineups of musicians in the long-running Consort including David Darling, Colin Walcott, Ralph Towner, Paul McCandless and Herb Bushler. Guest musicians included Billy Cobham, Milt Holland, Barry Altschul and others. Towner, Walcott and McCandless went on to form Oregon, a long-running jazz-adjacent outfit shortly after this album was recorded. And the producer of the album was George Martin, producer of the Beatles.

Many of the songs that were originally on this album went on to become classics in their own right including the title track, “The Silence of a Candle” and “Sunwheel” among others.

Check out “Icarus” with Geoff Anderson on the Vinyl Vault this Tuesday, January 24 at 8:30 pm on KUVO JAZZ.