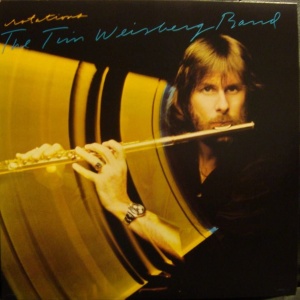 This week the Vinyl Vault will feature a 1978 album from flutist Tim Weisberg entitled “Rotations.” The album was released in the midst of Weisberg’s busiest time which was during the 1970s when he released a dozen albums over the course of the decade.

Most of his albums up to this time had been in a quintet format, but this album features a number of big production numbers with the Muscle Shoals Horn Section and several guest artists such as drummer Bill Stewart, percussionist Bobbye Hall, keyboard man Chuck Leavell and Mickey Raphael. Also in the band at that time was keyboardist Neil Larsen who has recorded several albums under his own name.

The album includes several tunes written by Weisberg’s band mates guitarist Todd Robinson and bassist Doug Anderson as well as others including Larsen’s “Sudden Samba” which Larsen also recorded on one of his own albums. Also on “Rotations” is a funky version of Donovan’s “First There Is A Mountain.”

Check out some flute-jazz on Tuesday, June 29, at 8:30 pm on the Vinyl Vault with Geoff Anderson on KUVO JAZZ.