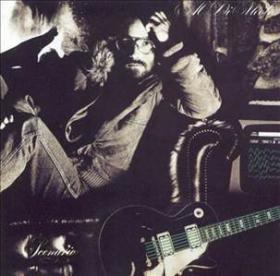 This week’s featured album on the Vinyl Vault is “Scenario” from Al DiMeola. This 1983 release on Columbia is mostly a duet album with keyboard/synthesizer player Jan Hammer, although both Phil Collins and Bill Bruford make cameo appearances on drums. Despite the mostly duo format, the sound is much bigger than just two guys thanks to the judicious use of synthesizers and overdubbing. Like all of DiMeola’s other albums, this one showcases his virtuoso chops and top flight song writing ability. And like many of his other records, this one is mostly electric with an acoustic tune closing out side one.

I’ve been an Al DiMeola fan ever since he blasted into the scene as a member of the very electric version of Return to Forever in the early 70s. After he left that band, he released a remarkable series of solo albums, many of which reside, quite comfortably, in the Vinyl Vault. “Scenario” is a recent addition to Vinyl Vault, having been added to the collection only earlier this year while I was dutifully supporting Record Store Day. I wasn’t familiar with this particular release, but knowing DiMeola, I knew it had to be good, plus at 99 cents (no kidding!) I couldn’t pass it up. On top of that, there was an additional 30% discount for Record Store Day. That extra 30 cents off really closed the deal.