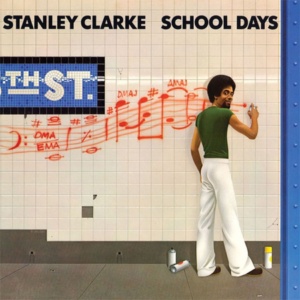 We believe in second chances…this edition of Vinyl Vault was previously scheduled on August 11 but we were unable to air it because of technical difficulties. So here’s your second chance! Enjoy!

This week’s Vinyl Vault features the fourth album from bassist Stanley Clarke, “School Days.” Clearly a fusion classic, the album was released during fusion’s heyday in 1976. Clarke was also a member of Return to Forever at the time and 1976 was the year that band released its most successful album, “Romantic Warrior.”

Although a “solo” album, Clarke gets extensive help from a number of sympathetic players like Raymond Gomez on guitar, George Duke on keyboards, Steve Gadd on drums, David Sancious on guitar and keyboards, Billy Cobham on drums and others.

Besides his state of the art bass playing, Clarke composed all the tunes on the album. The complexion of the compositions runs from funk to R&B and of course to a healthy dose of jazz-rock fusion. The album features the players’ lightning-fast virtuosity, but also slower, more reflective moments such as the song “Quiet Afternoon” that has become a popular cover tune. The title track is based (pun intended) around a catchy bass line. The set closer, “Life is Just a Game” is a big production number with massive brass and string sections, yet is tastefully done and comes the closest to the intricate bombast of “Romantic Warrior.”

Check out the Vinyl Vault on Tuesday, September 29, at 8:30 pm during the Night Beat with Geoff Anderson only on KUVO Jazz!