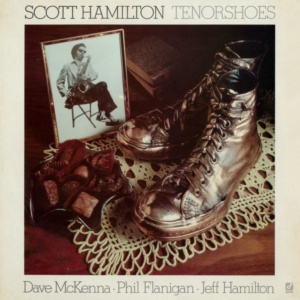 Hamilton has recorded nearly 70 albums under his own name and appeared as a sideman on a like number over a recording career spanning 45 years. “Tenorshoes” was his seventh album, so it caught him early in the game. But all the elements that have made him a popular player all these years shine through on this album including his relaxed, seemingly effortless style and his ability to gently swing in a way that’s both intricate and casual.

Hamilton was joined by a stellar cast on the album including powerhouse pianist Dave McKenna. Also on the date were a young Jeff Hamilton on the drums and Phil Flanigan on the drums.

The program is primarily jazz standards, but Hamilton contributed one original composition.

Join Geoff Anderson on Tuesday, May 3, at 8:30 on the Vinyl Vault. Only on KUVO JAZZ!