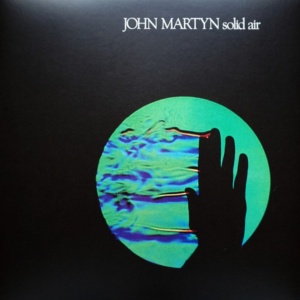 This week’s Vinyl Vault features a ground-breaking album from British folk musician John Martyn, his 1973 release “Solid Air.” Martyn jumped into the London folk scene in the late 1960s, releasing a couple of albums of acoustic, yet forward-looking music. By the early 1970s, he was following a trajectory similar to Joni Mitchell, who also began in the folk realm and eventually took her music far, far away from that home base.

For “Solid Air,” Martyn incorporated heavy doses of jazz and blues as well as some rock influences with his folk roots surfacing only occasionally. Martyn was a pioneer with the foot pedals that are now so common among guitarists. In particular, Martyn was an early adopter of the Echoplex, creating early loops of sound, setting up a percussive, often hypnotic base to weave his songs around, over and through. Several tracks on “Solid Air” offer a graduate-level seminar on how the Echoplex can turn an acoustic guitar into a completely different instrument.

Martyn was a contemporary and friend of the troubled Nick Drake, who is best known these days as the composer of the song “Riverman” which has now been recorded by probably a dozen jazz players, at least. In fact, Martyn wrote the title track of the album for Drake, who nonetheless died of an overdose of antidepressants only a year and a half later. Those familiar with “Riverman” will find many similarities on “Solid Air.”

All the songs on “Solid Air” were composed by Martyn with the exception of “I’d Rather Be the Devil” which was written by American bluesman Skip James. James was one of those early bluesmen who was active and did some recording in the early 20th Century, only to slip into obscurity. He was later “rediscovered” during the folk boom of the 1960s. His song “I’m So Glad” was recorded by Cream and the royalties from that recording alone, set James up financially for the rest of his life. Martyn’s treatment of “I’d Rather Be the Devil” is as haunting as the name implies and, through the liberal use of multiple guitar effects, he takes the song out of typical 12 bar blues territory into a bluesy, aural starfield.

The constant on all the tunes is Martyn’s voice and his guitar, but also ubiquitous is Danny Thompson on acoustic bass who provides the most direct jazz injection to all songs. Other tunes feature sultry sax and spacey, atmospheric vibes. This is definitely music best enjoyed with the lights off.

See (and hear) what “Solid Air” is all about Tuesday, September 8, with Geoff Anderson on the Vinyl Vault at 8:30 pm on KUVO JAZZ.