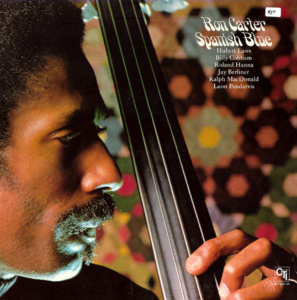 This week’s Vinyl Vault, Fundraiser Edition, features a 1975 album from Ron Carter entitled “Spanish Blue.” Released on the CTI label, the album features four tracks, three written by Carter along with “So What” from his prior employer, Miles Davis. Two of the Carter originals were inspired by a stay in Barcelona, Spain in the 1960s when Carter was on tour with Davis. The all-star cast on “Spanish Blue” includes Hubert Laws on flute, Roland Hanna on piano, Billy Cobham on drums, Jay Berliner on guitar and Ralph MacDonald on percussion. Check out the Vinyl Vault with Geoff Anderson Tuesday, October 1 at 8:30pm, only on KUVO Jazz.