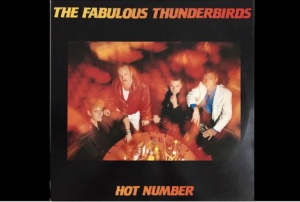 The Vinyl Vault takes a blues excursion with a 1987 album from The Fabulous Thunderbirds entitled “Hot Number.” This was the band’s sixth album and was released on CBS Records.

The band’s lineup changed continually over the years, but during the 70s and 80s had generally been a four-piece with a fairly stripped-down sound. Kim Wilson, on vocals and harmonica, has been the leader of the band throughout its existence. The other co-founder, Jimmy Vaughan, Stevie Ray’s big brother, was still with the T-Birds for this album. Fran Christina played drums and Preston Hubbard was on bass. For “Hot Number,” the band added the Memphis Horns as well as keyboards by Chuck Leavell for a bigger sound. The album was produced by British rocker Dave Edmunds who also played guitar on the album.

Most of the tunes on the album are originals penned by Kim Wilson, but there are several covers as well including one from Duke Robillard, founder of Roomful of Blues and eventual member of the T-Birds a few years after this album was recorded.

The T-Birds originally got together in Texas in 1974 and a version of the band still tours. You can hear what they sounded like in 1987 by joining Geoff Anderson on the Vinyl Vault on Tuesday, October 26, at 8:30 pm on KUVO JAZZ.