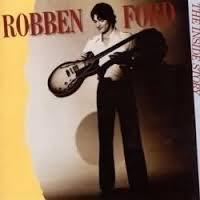 This week’s Vinyl Vault features a 1979 album by guitarist Robben Ford, “The Inside Story.” Ford was a veteran of both blues and fusion bands by the time he recorded this and the music draws heavily from both genres. As a teenager, he played in the straight ahead blues band, The Charles Ford Band with his brothers. Later he joined Tom Scott and the L.A. Express for a couple albums with that band and some time with Joni Mitchell, including her live album “Miles of Aisles.”

The album features Russ Ferrante, Jimmy Haslip and Ricky Lawson who went on to form the Yellowjackets shortly after recording this album.

Geoff Anderson has reached the 25-year mark as a KUVO/KVJZ volunteer. For almost all that time he has been on the air Tuesday evenings. Geoff started in public radio in 1976 at KCSU in Fort Collins. After taking a time out from radio to attend law school and start a legal career, Geoff dove back into jazz radio by volunteering at the then fairly new KUVO in 1988. For more on host Geoff Anderson , read his bio here and connect with him on twitter @AndersonKUVO.