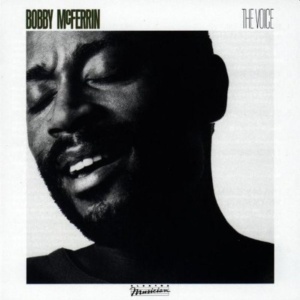 This week on the Vinyl Vault it’s vocal jazz. A cappella vocal jazz that is. By just one guy. Which means only one thing: Bobby McFerrin. This Tuesday we’ll hear several cuts from McFerrin’s 1984 album “The Voice” The LP was released on Elektra/Asylum Records and was the first McFerrin album featuring only the man and his voice.

All the cuts were recorded live during a concert tour of West Germany in March 1984. The program features covers of tunes by James Brown, the Beatles, Billy Strayhorn and Charlie Parker along with several McFerrin originals.

McFerrin had released a previous album, but this marked the first for the vocalist in a completely unaccompanied format with no over dubbing. It was a harbinger of things to come and was the beginning of his world-wide success. Neither before nor since has a single, unaccompanied vocalist made the kind of impact McFerrin has had in the world of music.

Check out the unique McFerrin sound (nearly) at the moment of conception. Join Geoff Anderson on the Vinyl Vault this Tuesday at 8:30 pm on KUVO JAZZ.